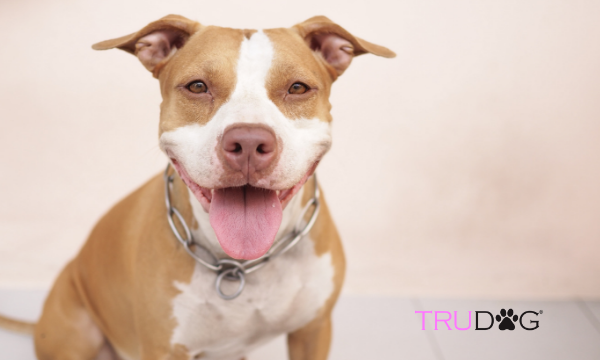 With numerous misconceptions about their personalities being violent, the pit bull may undoubtedly be one of the most misunderstood dogs of today.

Their lineage traces all the way back to the 1600s in England, descending from bulldogs. Until it became illegal in the mid-1800s, Bulldogs originally were bred and used for bull and bear baiting. Sadly, bull and bear baiting were replaced with the blood sport of dogfighting. Because of their original aggressive lifestyle, pit bulls have been given a bad reputation of being violent and dangerous. But under all their mighty muscle, is a pure heart of gold. Your dog’s skin and coat are the natural first line of defense against toxins! Essential OMEGA 3 DHA and EPA in Soothe Me may help your dog cope with the toxic effects of our environment naturally by promoting healthy skin and a healthy coat.

The first common misunderstanding about pit bulls is that people believe they are a breed all to their own. However, the term pit bull is usually referring to a “crossbreed.” Bulldogs began being crossbred with terriers, overall resulting in the creation of the crossbreed, “pit bull,” that we know and many of us love today.

So where else have these lovable animals been misunderstood or under-represented? Here are some facts about pit bulls that you may not know, but ultimately will have you understanding better how normal and loving they really are!

6 Things You May Not Know About Pit Bulls

When Pit bulls are loved and trained properly, they can sincerely be one of the best dogs to have as pets. Let’s help spread the love for these gentle and loving animals as they are intended to be showcased. By spreading the word, we can help quiet the negative misunderstandings and perceptions of these beautiful dogs.

If you have or know a pit bull, you should treat them with something from our delicious selection of nutritious dog treats! Check them out here.

Hey there! I’m Danielle, and I am a total animal lover! As a child I grew up in a household with Lhasa Apso’s, and at the young age of five I convinced my parents to adopt an adorable Orange Tabby cat who soon became my best friend. Currently, I have two fur baby Shitzu siblings that reside with my parents in NY, and aside from my parents, they are my favorite thing to come home to when I visit from California. No matter what the breed, every dog I see I always stop to give it love and claim each one to be my friend after even the briefest of encounters. You can find me either volunteering within local communities, freelance writing, or playing my full-time role of executive assistant. I’m excited to combine my love of animals and writing through my contributions to TruDog.