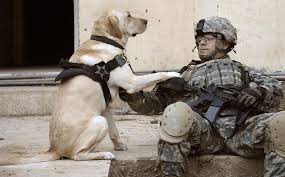 Service dogs guide military heroes through second chances  Dogs have been a part of the military with U.S. Soldiers in every major war, though they were not recognized until World War II. In 2013, the report was that there were approximately 2,500 dogs in active service, with about 700 deployed overseas. In 2016, the numbers have doubled.

The dogs were trained to attack the enemy, trained in bomb, weapon and drug detection, and they were used in search and location missions.

Another way that dogs have been assets in the military have been as ‘service support’ to their human companions.

There are plenty of stories out on the Internet concerning the abilities and importance of service dogs. Service dogs not only alert their companions to possible problems – seizures and oncoming traffic, they also give their companions courage and the ability to live life daily.

During times of battle, a dog can also become man’s biggest protector.

Kai, a service dog to Air Force Sergeant August O’Neill, sat and watched O’Neill as he propelled down from a Black Hawk helicopter to the opening of the Invictus Games Sunday night. O’Neill’s lower left femur was shattered, and he fractured his right tibia after being injured by gunshots to both legs. After a little more than 20 surgeries, O’Neill had his left leg amputated. Kai was trained to be O’Neill’s support.

According to O’Neill, Kai has helped him through many tough times. Physically, Kai helps by acting as a brace.

For Retired Special Operations Command Sergeant Leonard Anderson, his service dog, Azza, has been with him since the day he was injured in Afghanistan. They were struck by an IED in 2012. Anderson has competed in Special Olympics for injured veterans in swimming, and won many medals. Azza has been with him at every event.

Bruce, a black Labrador, roams the halls of a Veteran’s Administration Hospital as if he owns the place. In fact, Bruce was there to work. The dog’s purpose is to help the veterans as they heal from the physical and spiritual and mental wounds of war. U.S. Marine Terry Bryant has been a recipient of Bruce’s help. Bryant was a drill sergeant in Vietnam.

Therapy dogs, like Bruce, are trained to help military veterans heal from PTSD to lost limbs.

Sgt. Shaun O’Brien suffered a traumatic brain injury after a rocket blast in Afghanistan. Now, a service dog helps him get through each day. O’Brien lives in Winfield, NJ, and in 2011, he served in Afghanistan, where he suffered a mortar shell attack and was diagnosed with traumatic brain injury and post-traumatic stress disorder. His dog, Lee, a German Shepherd, helps him through those issues by offering comfort, and helps O’Brien in picking things up that his injuries keep him from doing.

Stefan LeRoy (US Army Ret.) and Gabe Martinez (US Marines Ret.) are both veterans who are bilateral amputees as a result of injuries sustained during their military service. They both have service dogs. LeRoy works with Knoxville, and Martinez works with Wonka. Both dogs are trained in about 40 commands, including turning on lights, carrying items and retrieving items such as credit cards or assistance devices.

Service dogs do more for their companions than tend to the physical and mental needs, they also provide friendship.