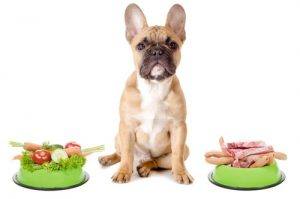 Dogs and cats are not herbivores. They’re not omnivores, either, despite our best efforts to make them be.

Dogs are carnivores. Cats are carnivores. No legitimate biologist would suggest differently. Dogs and cats are not designed to subsist on a plant-based diet. Their teeth aren’t adapted to it, their digestive system is not adapted to it and the nutrients their bodies require for optimal health depend on obtaining and eating the type of food they were designed to eat – meat.

There is considerable study underway on the subject of pet health and how it relates to diet. Those of us who support the BARF diet (gross name, great concept… in case you haven’t heard of it, it stands for Biologically Appropriate Raw Food) argue – based on the natural behavior of all canine and feline species in existence anywhere on the planet for all of recorded history – that the best diet for dogs and cats consists primarily of meat. We would suggest that raw meat is particularly healthy for cats and dogs. After all, that’s what they were designed to digest. It’s what any dog or cat, left to nature, will try to catch and eat. 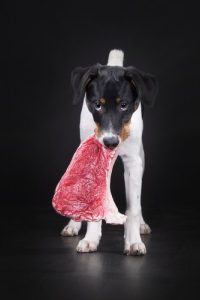 There are Detractors, but…

Of course, there are those who disagree. Some have even suggested that eating raw meat is unhealthy for your pets. This group includes some veterinarians’ organizations (though it should be noted that many vets also support the concept of the BARF diet). So, why would veterinarians object to feeding animals their natural diet? There could be plenty of reasons, of course, but the surest bet when you’re looking for anyone’s motive for any given stance is to ask yourself cui bono? (Who benefits?)

Often, those who most adamantly oppose a raw meat-based diet for animals who clearly are adapted to eat raw meat benefit financially from the sale of processed animal feed. They’ll be happy to sell you a “healthier” version of the corn based diet they recommend. They won’t generally mention that the ingredients are generally the same as the cheap kibble you can buy at Wal-Mart.

A friend of mine’s most memorable college experiences – being a dog lover – was when a fellow student who was working his way through college at the processing plant of a major pet food manufacturer gave a demonstrative speech, detailing the fact that the allegedly supra-nutritious brand of dog food was made from the exact same batch of meal that was used to make both that manufacturer’s name brand pet food and the brand-X you could get cheaper still. The difference between the three? Besides the price, only the shape of the kibble. 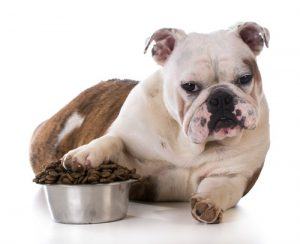 The bottom line is that your dogs and cats were made to eat and digest raw meat. Doesn’t it make sense they would be healthiest when they’re eating what they’re designed to eat?

If you want to know more about this healthier and more nutritious diet for your dog- check this page out.